How, When, and What to eat for Munching? 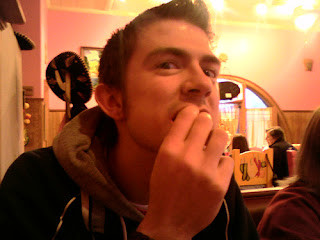 Many of us have the habit of munching. And if you are stressed because of the fact that your dietician has advised you to reduce or stop munching, you can relax. Because, munching is not as harmful as you feel, when you know how, when, and what to eat. Rather, as we saw in the last week’s article, being empty stomach for too long is more harmful than munching.
Just remember these points—
(1)   Follow the timing for munching as far as possible. Let it fall between meals with a distance of around 1 and ½ to 2 hours. Don’t start it immediately upon lunch. Try to have smaller quantity of what you have from beginning. Eg- If you like to have two toasts, have only one instead!
(2)   Reducing the portions of your munching goes a long way in maintaining the weight. This way, you also don’t deprive yourself of the thing you like and also can teach the brain to feel satiated with smaller portion over the period of time. This is especially true if you tend to indulge in stuff like bhaji and wada. With practice, it is possible.
(3)   Include your beverages too in munching. It means, if you want to have a cup of coffee, it shouldn’t be coupled with your bhaji or wada. It should be taken separately just like an item in itself. This is true even for cold drinks and sharbats.
(4)   As far as possible, don’t munch sitting in front of television, else you are going to eat more. This should be maintained especially in case of growing children, as the problem of childhood obesity is increasing day by day.
(5)   Change your munching items. This is not difficult once you decide to do. Housewives! Don’t keep the items that you crave for like fried food in the home, else you tend to eat them in your afternoon TV time.
(6)   Go for nuts, dry fruits, fresh fruits, salads (without salt and sugar), sugar-free beverages (home-made), roasted items (If you buy from outside, make sure they are roasted and not fried), pohe without oil, lahya, ravyache padartha, lahyanchi pithi, etc
Posted by Dr Shreya Deshpande at 11:06 PM No comments:

Importance of Having Breakfast in the Morning! 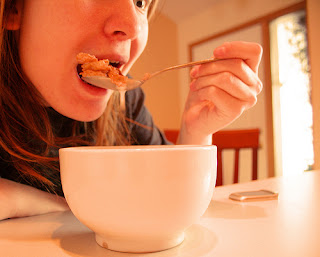 In this fast paced life, many people seek shelter of the reason “lack of time” to skip their morning breakfast. Do you think it is better to rush to work without your breakfast? If yes, then it is time to think again. The leading scientists now give crucial importance to breakfast as the main meal of the day. Here is why—
(1)   After you sleep nearly for 6 to 8 hours, body’s energy stores are depleted. It needs “real food” in the morning that provides the necessary fuel to keep you active throughout the day.
(2)   Skipping breakfast is thought to be the major cause of weight gain. Avoiding breakfast makes you excessively hungry during mid day that makes you eat more at a time. Instead, morning breakfast helps you keep fuller for longer.
(3)   Also breakfast helps to boost up body metabolism due to which more calories are burnt, thus again helpful to check your extra pounds.
(4)   Good breakfast is said to increase your concentration power and that of your children at school.
(5)   In children, the survey says that morning breakfast helps them enhance their problem solving capacity and memory.
(6)   Morning breakfast is said to be a mood elevator. People affected with depressive spells are especially benefited by adding breakfast as their main meal of the day. You will find that people who have royal breakfast tend to be more jovial and full of positive attitude towards life.
But choose your breakfast wisely. It is always a better idea to go for home-made food than the packed breakfast foods available today. You need not go by fancy names but our own upama, pohe, chapatti, milk, and other dairy products work marvelously well when added to morning breakfast. So when are you starting to add energy to your life! It’s worth it!
Posted by Dr Shreya Deshpande at 11:02 PM 1 comment:

An article by- Dr. Santosh Joshi

Introduction-
Alzheimer's disease is the most common cause of dementia in the elderly. More than 60% of the cases of dementia are due to this. Its prevalence is age related is as high as 47% in persons of 85 years above.
Definition: It is a degenerative disorder of the cerebral cortex resulting in progressive senile dementia.
Causes
The persons in whom the onset of the disease is before 65 years of age, the genetic factors are considered to be one of the important causes.
The main cause of this functional debility is the irreversible death of the brain cells due to deposition of protein plaques.
Environmental agents like viruses are also considered to be one of the causes, but, enough evidence has not been found in this respect.
Risk factors
o Advancing age is a risk factor, though; all elderly persons do not invariably show these features.
o Having as family history of the disease.
o Alcohol toxicity, previous head trauma and some immunological factors may also add to the risk of developing the disease.
Screening diagnosis
The disease has a very insidious onset and it progresses very gradually. It basically affects the emotion, intellect and memory of the person. It develops through 3 stages:
Stage 1
o The memory of the person is affected in the initial stages. First, impairment of memory for recent happenings can be noticed which is later followed by impairment of long term memory also.
o Patients themselves complain of the difficulty in the initial stages.
o The person also has disorientation of time and place; he misidentifies things and people.
o He repeats his words again and again.
Stage 2
o Here, the patient denies that anything is wrong with him says that he is alright.
o Gradually, the person shows deterioration of his intellectual functions and certain personality changes occur. He may also develop problems pertaining to speech language.
o He may later develop aphasic syndrome (Lack of right word at the right time compels the patient to compensate by speaking around the subject- àparaphasia-àimpoverished vocabulary- also that the patient can't convey his feelings due to fragmented words sentences -a mutism results.)
o Constructional apraxia (Inability to draw two or three dimensional figures.) follows.
o The person finds it difficult to wave his h to someone, greet someone or even to use a pen for writing.
o Visual agnosia develops (inability to comprehend what he sees).Due to these functional deficits, the person develops some psychiatric disturbances like: depression, aggression, anxiety, delusions, sleeplessness etc.
Stage 3
o Finally, the person reaches a stage when he has to depend on others for his daily living activities.
o The person may develop self care apraxias like: dressing, shaving, bathing, combing hair.
o Visual agnosia is followed by auditory, tactile agnosias.
o In these advanced stages, even the musculature is affected. The patient walks in a shuffling manner with short steps. Stiffness of all the muscles leads to slowness and awkwardness of all the movements. The entire course of the illness is 5-8 years approximately. During the course of the illness, any coexistent illness worsens the condition of the patient acutely.
Diagnosis:
It is basically done by ruling out any other causes of cognitive disorders.
Progressive worsening of memory and at least two areas of cognitive impairment.
Onset between 40 years 90 years of age (mostly, after 65 years) the person should be in a state of normal arousal i.e. he should not be drowsy, or comatose or delirious.
Diagnosis is based on the order of the appearance of the symptoms can be supported by imaging techniques like: MRI, CT scan ; which show enlargement of the ventricular space along with brain atrophy. But, this is not confirmatory of Alzheimer's as such changes are also seen in most of the other people of this age group.
Homoeopathic treatment:
The homoeopathic medicines cannot provide cure to the patients, but will help in recovery of the memory loss of the patient.
Our medicines will also help by altering the rate of progress of the disease. Also, the other psychiatric disturbances which the patient develops in the course of the disease like anxiety, depression, delusions, disturbed sleep etc can also be safely relieved by homoeopathic medicines.
If the patient is brought to us in the early stages, we have a lot to help for relieving the patient's complaints without any other side effects.
Environmental structuring: This means providing a safe, non stimulating, environment to the patient which provides him with consistency comfort.
Patient care
o For stage 1 patients, reality orientation is very helpful.
o For stage 2 patients, reality orientation is not possible; hence validation therapy is the best choice. Here, we should value support the patient's feelings thoughts.
o The patient should be encouraged to do self care, exercise his other activities. His mental and emotional states, his other vital signs body functions should be assessed for any deterioration.
o We should keep in mind the patient's capabilities our expectations should not exceed his abilities to perform any tasks.
o We should speak to the patient calmly allow him sufficient time to reply as we understands that the thinking process of the patient has slowed down. He should also be referred to appropriate support groups, counseling groups etc.
Dr.Santosh Joshi
Article Source: http://EzineArticles.com/976387